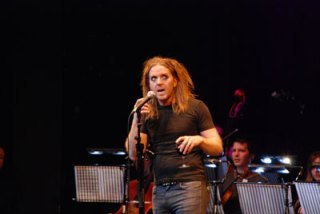 Comedy superstar (and rationalist) Tim Minchin was supposed to be on The Jonathan Ross Show this week. He’d even written a brand new song for it, as he explains on his blog:

“Being Christmas, I thought it would be fun to do a song about Jesus, but being TV, I knew it would have to be gentle. The idea was to compare him to Woody Allen (short, Jewish, philosophical, a bit hesitant), and expand into redefining his other alleged attributes using modern, popular-culture terminology.”

The recording went ahead as planned last Tuesday, everyone involved enjoyed it, and Tim even managed to finish in time to shoot off to the Hammersmith Apollo to join Brian Cox on stage at Robin Ince‘s Uncaged Monkeys show.
But when the show airs tomorrow night, Tim will be nowhere to be seen:

“Subsequently, Suzi [the show’s producer] and her team edited the show and everybody was happy. Suzi felt it had a nice balance of big-ticket celeb action, local talent, and a nice bit of that cheeky, iconoclastic spirit for which Jonathan is known and widely loved.

And then someone got nervous and sent the tape to ITV’s director of television, Peter Fincham.

And Peter Fincham demanded that I be cut from the show.

He did this because he’s scared of the ranty, shit-stirring, right-wing press, and of the small minority of Brits who believe they have a right to go through life protected from anything that challenges them in any way.”

Fortunately, Tim already had the footage, and he’s uploaded it to YouTube for people to judge for themselves. If you ask us, it’s hard to imagine how the edifice of Christianity could have remained standing had the sensitive ears of Christian ITV viewers not been spared this gently blasphemous comedy number.