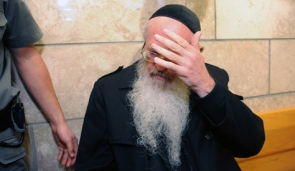 Rabbi Yaakov Deutsch, a prominent rabbi from the city of Afula in  northern Israel, was indicted on Sunday for committing sexual offenses  against four minors, two boys and two girls.

Rabbi Yaakov Deutsch, a prominent rabbi from the city of Afula in northern Israel, was indicted on Sunday for committing sexual offenses against four minors, two boys and two girls.

According to the indictment, which was served by the northern district attorney’s office at Nazareth District Court, Deutsch, who has lived in Afula for forty years and has become an important local figure with a large following, abused his position to carry out a number of sexual offenses against minors.

Rabbi Deutch’s lawyers argue that the complaints against the sixty-year-old rabbi are the result of behind-the-scenes activity. “We know that there are people who are going from house to house in the local community convincing children to complain against the rabbi,” they said.
“The complaints were not created in a vacuum,” they said.

The lawyers claim that the father of one of the alleged victims was caught stealing money collected for charity at the institution that Rabbi Deutsch heads, and that a number of other people who were fired from their jobs at the institution have been plotting against him.

The Rabbi’s lawyers have also passed police recordings of conversations in which they claim some of the alleged victims deny the abuse, and that a third party had pushed them into lodging their complaint.
The case was revealed a year ago, when Deutsch was detained by Afula police