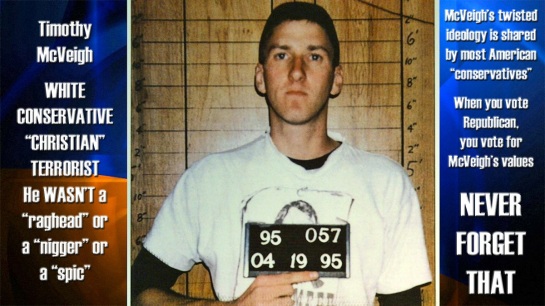 Today is the anniversary of the largest act of domestic terrorism in United States history, the bombing of the Alfred P. Murrah Federal Building in Oklahoma City in 1995. 168 people were killed, including 19 children. Now here’s the part we’re not supposed to talk about: the bombing was carried out by right-wing extremists during a time of overheated right-wing rhetoric. Today’s right-wing rhetoric makes the 90s look like water cooler gossip. But making that comparison is frowned upon.

Why is that? Why aren’t we supposed to talk about it? Because it’s “politicizing a tragedy?” Because Timothy McVeigh and Terry Nichols were “lone wolves” and the whole thing is just an “isolated incident?” That’s all bullshit. The nature of the attack was explicitly political. McVeigh was motivated by his far right ideology and a deep hatred of the government. Specifically, a Democratically led government. He felt that the debacles at Waco and Ruby Ridge were the beginnings of the much dreaded “government takeover” that paranoid militia groups have been preparing for. While Ruby Ridge was a legitimate mess and possible overreaction by the government, Waco was not.

David Koresh was your run-of-the-mill cult leader: charismatic, intelligent, narcissistic and completely amoral. He demanded that he be the one to impregnate his female followers and did not blink at statutory rape. Of course, he was the prophet and the messiah so why should he? This is who McVeigh was “defending;” a megalomaniac that raped little girls.

Still, this was perfectly acceptable if it meant “freedom” from the oppressive government.

Just to be clear (something the right does not enjoy when it comes to this topic) McVeigh was, without a shred of doubt, a right-wing extremist. When captured, he had pages of The Turner Diaries on his person. The Turner Diaries are an infamous right-wing, white supremacist (yes, that was redundant) novel about overthrowing the US government and the start of a race war that ends with the extermination of Jews and all non-whites. He was sympathetic to, if not an actual member of, the militia movement. The same militia movement that swelled during the Clinton years, fueled by conspiracies of black helicopters coming to kill or capture anyone that President Clinton wanted silenced. The same movement that went quiet during the Bush years even though we were “under attack” at all times from secret terrorist cells that were plotting our destruction. The same movement that wasn’t afraid of a Republican president trashing the Constitution with the Patriot Act but was simply terrified of a Democratic president who happened to be black (his skin color couldn’t possibly have had anything to do with it). The militia movement is undeniably fueled by right-wing hate and fear and it, in turn, influenced McVeigh.

Are you starting to understand why the right doesn’t want to talk about this?

There have been dozens of acts and attempted acts of right-wing violence in just the past three years as the right wing has ratcheted up their eliminationist rhetoric to an insane degree. The same message is repeated over and over and over: “It’s us or them. We’re at war. Get ready for violence, the liberals are coming.” Several massacres have been averted, some of them by chance but it’s just a matter of time until one slips through. In their paranoid fantasies of “taking their country back,” it doesn’t matter who gets hurt because they believe they’re at war. When asked about the death of children, some of them infants, McVeigh had this to say:

“I didn’t define the rules of engagement in this conflict. The rules, if not written down, are defined by the aggressor. It was brutal, no holds barred. Women and kids were killed at Waco and Ruby Ridge. You put back in [the government’s] faces exactly what they’re giving out.”

This is the result of the rights’ violent rhetoric and we should never let them forget, no matter how hard they try, that this is what they stand for: 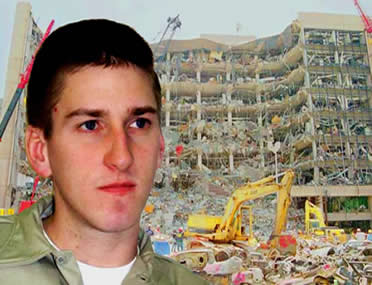 This is Baylee Almon. She had just celebrated her first birthday the day before she was murdered by Timothy McVeigh. She died shortly after this picture was taken. When you listen to Ted Nugent declare that he will be dead or in jail if Obama gets re-elected, when you read about Wayne LaPierre, vice president of the NRA, insist that Obama is secretly preparing to steal everyone’s guns, when you hear every other pundit on Fox News compare liberals to Nazis, they do not represent patriotism or freedom or American values. They represent a baby dying as she is pulled from the wreckage of right-wing terrorism.

Take a moment to remind a conservative what today is and ask them if they’re OK with it. After all, the Tea Party’s favorite slogan is “The tree of liberty must be refreshed from time to time with the blood of patriots & tyrants.” Timothy McVeigh was wearing that slogan on a t-shirt the day he murdered Baylee Almon, 18 other children and 147 other people. I think they should be reminded of that fact.