EDL leader Stephen Lennon (aka Tommy Robinson) has been charged with multiple counts of mortgage fraud. So on top of being an anti-Muslim bigot and all around Islamophobe he’s also a suspected criminal who loves committing fraud through the tactic of false representation.

These charges are separate from the investigation relating to Yaxley-Lennon’s prosecution and (current incarceration) for illegally entering the US to attend Pamela Geller & Robert Spencer’s conference in New York in September 2012. (h/t: Jai)

Stephen Lennon, 30, is accused of three counts of conspiracy to commit fraud by false representation in relation to a mortgage application.

Mr Lennon is due before St Albans Magistrates Court on 7 December.

He will appear with five others, from Luton, Silsoe in Bedfordshire and Watford, who were arrested as part of the same investigation.

They face charges including fraud, money-laundering and possession of drugs with intent to supply.

One wonders about the silence of the Yaxley-Lennon’s US partners Robert Spencer and Pamela Geller. No doubt they will continue their defense of the EDL leader and claim he is being persecuted due to politically correct multiculti influenced Sharia. 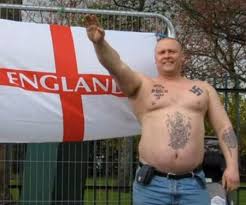