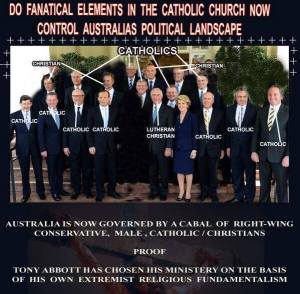 The editorial in the Age today suggests that “the Abbott government is cynically moving to de-legitimise certain institutions that perform vital roles in the democratic life of this nation.”

This latest reprehensible attempt to silence the Human Rights Commission is, as Penny Wong points out, part of a wider pattern of behaviour.

This is a Government that seeks to intimidate people who don’t agree with their policies and to silence independent voices.

Within hours of being sworn in, the Prime Minister’s office issued a press release, announcing three departmental secretaries had had their contracts terminated and the Treasury Secretary Martin Parkinson would be stood down next year.

AusAID was integrated into the Department of Foreign Affairs and Trade (DFAT) and its director-general Peter Baxter resigned.

“AusAID has been delivering an aid program that eradicates poverty in the world’s poorest communities, while DFAT’s objective is to promote and protect Australia’s national economic and political interests.”

The head of Infrastructure Australia, Michael Deegan, stepped down in February 2014 after he lashed out against the Abbott government for eroding the advisory body’s independence.

Infrastructure Australia disagreed about the priorities being pushed by government.  For example, they had listed Sydney’s WestConnex motorway as an ”early stage” project, despite Premier Barry O’Farrell’s and Prime Minister Tony Abbott’s determination to proceed with the project.

”Grand announcements, ‘funding commitments’, glossy brochures, and project websites do not change the reasons (why some projects had not progressed on his organisation’s priority list.),” Mr Deegan said in an email. ”Many proposals lack merit.”

But the Abbott government expunged this instruction as part of its rewrite of Infrastructure Australia’s mandate. This is despite infrastructure co-ordinator Michael Deegan’s warning that rising sea levels and heat stress are among climate impacts threatening ‘‘a significant proportion of Australia’s existing infrastructure assets … and adaptation will require changes to the scope and mix of infrastructure investment’’.

Talking about global warming is a death sentence to funding.

The CSIRO and the Bureau of Meteorology have had their funding slashed with hundreds of jobs lost and research programmes abandoned.  With no Minister for Science to point out the value of research it is seen as an avenue to save money and control the areas being studied.

As a direct consequence of the $111 million budget cut, the organisation will lose 489 researchers and support staff by mid-2015.  Another 300 positions will be cut after an internal restructure. The union estimates CSIRO is set to shrink by about 20 per cent over two years.

In August, management confirmed eight infectious disease researchers at the Australian Animal Health Laboratory in Geelong, the country’s only facility for researching live samples of deadly diseases such as Ebola, would lose their jobs.

Eight staff have left the Aspendale laboratory, which focuses on marine and atmospheric research, since the budget was handed down in May. Those leaving Aspendale include senior scientist Paul Fraser, who has taken a voluntary redundancy. Dr Fraser, head of oceans and atmosphere, has been honoured by NASA and also helped establish one of the world’s two most important climate research centres at Cape Grim in Tasmania.

Water research also appears to have been targeted. The office of water science research and the national water commission will be abolished, while the sustainable rural water use and infrastructure program’s budget has had a $400 million trim.

At CSIRO’s largest Victorian site, in Clayton, 15 staff have left or are in the process of leaving. The laboratory, home to research areas including advanced materials, nanotechnology, energy, mining and minerals work, had already lost staff under Labor’s efficiency drive. Among them was organic chemist San Thang, who was made redundant in September. It came as Dr Thang and two colleagues were nominated as frontrunners for the illustrious Nobel Prize in chemistry. Dr Thang has been made an honorary fellow – an unpaid position allowing him to both continue his work and to supervise PhD students.

In addition to the budget cuts, CSIRO also lost about $4 million indirectly when the government folded the Australian Climate Change Science Program into the new National Environmental Science Program.

A further 175 government bodies were cut in the last MYEFO, building on previous decisions to defund agencies in the 2014-15 budget, “taking the total reduction in the number of government bodies since the election to 251″.

Two groups whose funding ceased were the Biosecurity Advisory Council and the National Biosecurity Committee Stakeholder Engagement Consultative Group.  In light of the recent outbreak of Hepatitis A due to contaminated imported berries one wonders who is advising Barnaby on how to proceed.

Other bodies to be disbanded included the Diabetes Advisory Group and the Alcohol and Drug Council of Australia.  This is unbelievably short term thinking as the cost of these problems to our society are astronomic.

The Standing Council on School Education and Early Childhood (SCSEEC) Joint Working Group to Provide Advice on Students with Disability was also disbanded which fits in with George Brandis’ decision to replace the Human Rights Commissioner for the Disabled, Graeme Innes, with the IPA’s Tim Wilson – Commissioner for bigots and presumably the “anonymous source” quoted in the government attack on Gillian Triggs.

Reading through the list of bodies that have been axed makes me wonder who the hell is looking after these crucial advisory roles.

The Prime Minister for Women has watered down gender reporting while the Minister Assisting assures us that, whilst she likes women, she also likes men so couldn’t possibly be a feminist – a view shared by the highest placed woman in our government, Julie Bishop, who tells us that “it’s only a downward spiral once you’ve cast yourself as a victim.”

Righto.  Domestic violence, workplace discrimination and sexual harassment are our own fault and we should stop whinging….is that the message?

The Prime Minister for Indigenous Affairs promptly cut over half a billion in funding from Indigenous programmes and disbanded the National Congress of Australia’s First Peoples, replacing them with Gerard Henderson’s son-in-law Warren Mundine.

Speaking of Gerard Henderson, he was appointed Chairman of the panel tasked with awarding the PM’s non-fiction Literary Awards.  He chose to give the history award to “a poorly sourced anti-union tome” which was described as a rudimentary, badly-structured book full of hearsay by another panel member.  But it fed into Abbott’s anti-union agenda.

From the outset, Abbott has spent many millions of dollars in a frenzied attack on unions seeking to demonise and undermine the only group with the power to present a collective voice in bargaining to protect workers’ rights.

In December, the Abbott government reintroduced legislation to abolish the Australian Charities and Not-for-profits Commission, despite 82% of the sector believing it was important to keep the charity regulator.

ACNC Advisory Board Chair and Productivity Commissioner Robert Fitzgerald said: “…the key beneficiaries of the repeal of the ACNC are really only those organisations who do not want independent public accountability or transparency but which seek to continue to receive large benefits from the Australian community.”

Unsurprisingly, it was George Pell who told Kevin Andrews to get rid of the watchdog.  Scott Morrison appears to have recently backed away from the idea calling it a low priority while he gets his “family package” together.

Huge cuts to the funding of the ABC, questionable board appointments, and threats to journalists that they will be jailed if they report on “special operations”, are all designed to muzzle the watchdogs.

Whether it’s scientists, charities, Aborigines, people with disabilities, refugees, unions, feminists, preventative health groups, Muslims, infrastructure specialists, journalists, public servants, or even colleagues….Abbott does not want to hear from us unless it’s to agree.

Bill Wright, a priest and church historian who was vice-rector at St Patrick’s seminary whilst Tony was there, said many found him “just too formidable to talk to unless to agree; overbearing and opiniated. Tony is inclined to score points, to skate over or hold back any reservations he might have about his case.”

The Abbott government may not want to pay for advice but that sure as hell isn’t going to stop me from giving them some.

May Gillian Trigg’s strength and defiance be an example to us all and may we all raise our collective voices to defend those who this government would mute.