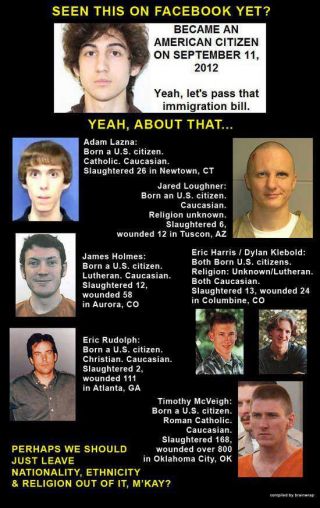 This morning as I logged onto Facebook, I came upon this image. Having followed the Boston marathon and MIT shooting coverage initially, I lost some interest when it came down to the “hunt.” As much as justice matters to me, so does tact and class, and the sensationalism of manhunts always leaves me uncomfortable. I also knew it would be a matter of time before the political rhetoric would change from the victims and wounded to the demographic factors of the suspects—namely race and religion. And alas, it has.

However, what struck me most about this image posted above was the Facebook page it came from, “Too Informed to Vote Republican.” I wondered about this, recalling an old journal article I’d come across when studying anti-Islamic attitudes post 9/11. The paper referenced a correlation between conservatism and low intelligence. Uncertain of its origin, I located a thought-provoking article published in one of psychology’s top journals, Psychological Science, which in essence confirms this.

Hodson and Busseri (2012) found in a correlational study that lower intelligence in childhood is predictive of greater racism in adulthood, with this effect being mediated (partially explained) through conservative ideology. They also found poor abstract reasoning skills were related to homophobic attitudes which was mediated through authoritarianism and low levels of intergroup contact.

What this study and those before it suggest is not necessarily that all liberals are geniuses and all conservatives are ignorant. Rather, it makes conclusions based off of averages of groups. The idea is that for those who lack a cognitive ability to grasp complexities of our world, strict-right wing ideologies may be more appealing. Dr. Brian Nosek explained it for the Huffington Post (link is external)as follows, “ideologies get rid of the messiness and impose a simple solution. So, it may not be surprising that people with less cognitive capacity will be attracted to simplifying ideologies.” For an excellent continuation of this discussion and past studies, please see this article from LiveScience (link is external).

Further, studies have indicated an automatic association between aggression, America, and the news. A study conducted by researchers at Cornell and The Hebrew University (Ferguson & Hassin, 2007) indicated, “American news watchers who were subtly or nonconsciously primed with American cues exhibited greater accessibility of aggression and war constructs in memory, judged an ambiguously aggressive person in a more aggressive and negative manner, and acted in a relatively more aggressive manner toward an experimenter following a mild provocation, compared with news watchers who were not primed” (p. 1642). American “cues” refers to factors such as images of the American flag or words such as “patriot.” Interestingly, this study showed this effect to be independent of political affiliation, but suggested a disturbing notion that America is implicitly associated with aggression for news watchers.

Taken together, what do these studies suggest? Excessive exposure to news coverage could be toxic as is avoidance of open-minded attitudes and ideals.  Perhaps turn off the television and pick up a book?  Ideally one that exposes you to differing worldviews.

*Please note comments that are offensive, defamatory, discriminatory, racist, sexist, homophobic, or otherwise inappropriate will be automatically removed by the author’s discretion.