Christian Reconstructionists’ believe that the legal code outlined in Old Testament books like Leviticus, Exodus and others should be binding on modern-day Americans. 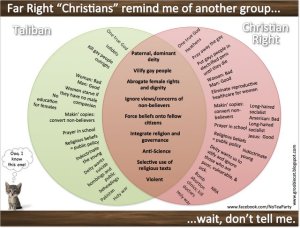 Every now and then, while scanning the day’s news, I come across a headline that’s hard to believe.

Like this one: “California lawyer proposes ballot measure to execute gays.”

Someone’s idea of a joke, perhaps? Well, it’s not funny.

As it turns out, this is real. An Orange County attorney named Matthew McLaughlin has submitted what he called the “Sodomite Suppression Act” ballot initiative to the California attorney general’s office. (You can read the whole thing here. Be warned, it is disturbing.)

Now, it’s worth noting that in California, anyone with $200 can submit a ballot question like this. The next step is to collect enough signatures to put it on the ballot – 360,000 in this case. That’s not going to happen, and even if it did, the attorney general would undoubtedly rule the question out of order because, well, it is insane.

But this incident is a reminder that we have among us a cohort I call the “American ISIS.” Like the followers of that fanatical movement, these people believe in imposing a hash version of law based on their interpretation of an ancient holy book on all of society.

In the United States, these people are known as “Christian Reconstructionists” or “dominionists.” In a nutshell, they believe that the legal code outlined in Old Testament books like Leviticus, Exodus and others should be binding on modern-day Americans.

The godfather of this movement, the since-deceased Rousas John Rushdoony, wrote a book called The Institutes of Biblical Law. In that tome, Rushdoony lists 18 offenses that would merit the death penalty in a “reconstructed” society. Among them are: blasphemy, homosexuality, adultery, “witchcraft,” incorrigible delinquency, unchastity and “propagation of false [religious] doctrines.” (A flavor for Rushdoony’s thinking can be picked up through this gem: “In the name of toleration, the believer is asked to associate on a common level of total acceptance with the atheist, the pervert, the criminal, and the adherents of other religions as though no differences existed.”)

Way back in 1988, I wrote a long article about this movement for Church & State. (Sorry, material that old is not online.) As part of the research, I drove to the outer D.C. suburbs of northern Virginia and interviewed a man named Robert Thoburn, a follower of this movement. Thoburn, a stout man with white hair and big glasses, smiled benignly during the interview. He looked like your grandfather. I had to wonder if he’d be smiling like that as he flipped the switch that executed a gay person, a witch or a propagator of false religions. (My bad – there wouldn’t be a switch. Most Reconstructionists argue that stoning is the preferred method of execution.)

In this country, Reconstructionists were never much more than theorists. They were prone to write long books and host conferences during which they would explore burning issue like what’s to be done with oxen that gore people.

But their influence was felt. Leaders of the Religious Right may not care to acknowledge it, but the Reconstructionists provided a basis for political engagement that helped spur the rise of that theocratic movement. A highly prolific bunch, the Reconstructionists penned books that became influential and provided the basis for the Religious Right’s attempt to remake American society in its own image.

When you read the platform of the Reconstructionists, you can’t help but notice its similarities to the goals of ISIS, the Taliban and like-minded bands of extremists. In both cases, there is great hostility to ideas like women’s rights, LGBT rights, pluralism, democracy and religious freedom. The irony, of course, is that both factions would consider the other “heathens” or “apostates” worthy of death.

While the Reconstructionists undoubtedly enjoy some sympathy among a small number of U.S. political leaders, they have nothing like their own party and (thankfully) no military arm. But, as recent events in California prove, their ideas are still out there and do pop up in unlikely places.