The Age of Blasphemy 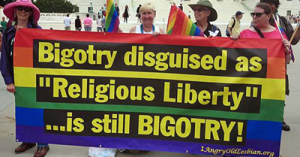 ‘Satan Dancing With Delight’: The Religious Right Reacts To The Legalization Of Gay Marriage

This morning, the Supreme Court ruled that state bans on same-sex marriage were unconstitutional, effectively legalizing gay marriage in all 50 states.

Needless to say, anti-gay Religious Right activists and Republican politicians who have repeatedly warned that such a ruling would literally destroy America have not reacted well, as exemplified by Bryan Fischer, who fired off a series of tweets declaring that Satan is now dancing in the streets of America:

June 26, 2015: the day the twin towers of truth and righteousness were blown up by moral jihadists.