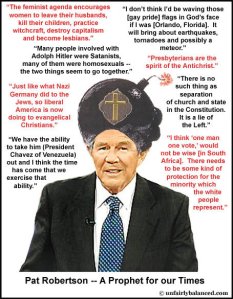 Right-wing televangelist Pat Robertson tackled the recent controversy over Memories Pizza, which became Indiana’s first business to publicly declare that they won’t cater to same-sex weddings in the wake of the state’s Religious Freedom Restoration Act this week.

“Most gays, if they’re having a wedding, don’t want pizzas — they want cake,” Robertson told “700 Club” viewers, according to Right Wing Watch. “It’s the cake-makers that are having a problem.”

Still, he warned Christian business owners of all types that gay customers will eventually “make you conform to them.”

Noting that Christian beliefs will “come under assault” until polyamory and polygamy are acceptable, too, Robertson lamented, “It’s a weird world we’re living in.”

The comments aren’t too surprising, particularly given Robertson’s recent history of anti-gay sentiments. In Febuary, he argued that a Washington state judge’s ruling that a florist had discriminated against a gay couple by refusing to provide flowers for their wedding was also indicative of society’s eventual embrace of bestiality.

He asked, “To tell a florist that she’s got to provide flowers for a particular kind of wedding? What if somebody wanted to marry his dog? She’s got to have flowers for that?”