Tony Abbott and Brandis both secretly met with paedophile protector George Pell. Why?

Federal Attorney-General Senator George Brandis QC secretly met with known paedophile protector and alleged paedophile Cardinal George Pell in May this year. It was only reported on Monday (20/7/15) because Brandis has spent the last 3 months trying to conceal it.

It is almost identical to Tony Abbott lying in an interview in 2004 on the ABC’s 7.30 Report about a secret meeting he had with George Pell before the 2004 Federal Election.

George Brandis should have never been anywhere near George Pell for many reasons. Not the least of which is that Pell is a sick and perverted person and a key witness at the $500 million Royal Commission into Institutional Responses to Child Sexual Abuse.

It causes major headaches for a lot of people including Prime Minister Tony Abbott who is also a long-time friend of Cardinal Pell. I find it impossible to believe that George Brandis would have met with Cardinal Pell without Tony Abbott’s knowledge and approval. Be that as it may, Prime Minister Abbott certainly knows about the meeting now and has said nothing which also suggests he has known for a long time.

The problem will not be going away as many sexual abuse victims are very upset about it and George Pell is due to give evidence at the Royal Commission again sometime before Christmas. It is guaranteed that Pell will be asked about the May meeting with Brandis when he is next at the Royal Commission and that will raise further questions for Brandis and Tony Abbott.

Channel 10 have a slightly longer report on their website where at the beginning they talk about Pell being accused of protecting paedophiles and at the end about Brandis’ office “only disclosing the lunch after persistent enquiries from Channel 10″. (Click here to watch)

George Brandis knew he should not be meeting with George Pell

It is not like George Brandis did not know Pell was a witness at the Royal Commission. Pell already gave evidence in March and August last year and was put on notice in May this year that he would be required for further evidence later this year.

Also, when the Royal Commission makes recommendations to the government Brandis will be having a substantial say in what recommendations they will implement. As a QC Brandis is fully aware that he should never have met with George Pell for legal reasons such as perceived bias.

In September 2013 I wrote the below in an article :

“Tony Abbott and George Pell have a history of working together in politics. Before the 2004 election Tony Abbott gave an infamous interview on the ABC’s Lateline where he was caught lying and deceiving in relation to a meeting with George Pell. A couple of days after the meeting George Pell was a signatory to a letter criticising the Labor Party.” (Click here to read more) Below is the video showing Tony Abbott lying.

Given Tony Abbott has previous history of telling a lie trying to conceal a meeting with George Pell did he tell George Brandis to try and conceal his meeting with Pell?

What does Abbott know about the meeting? What did Brandis say to Pell at the meeting? Did Brandis say to Pell that there is no need for Pell to worry as any negative recommendations by the Royal Commission against Pell and the Church will be swept under the carpet? Did Brandis pass on any messages to Pell from Tony Abbott at the lunch or pass on any message to Tony Abbott from Pell after the lunch?

Give credit where it is due

Alleged paedophile George Pell and his support for paedophile priests 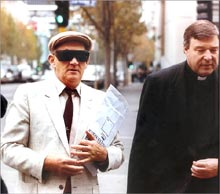 This article is not about George Pell and his recent actions are well-known so I won’t go too in-depth but his background is highly relevant to the article so I will cover a few parts. George Pell supported serial paedophile Gerard Ridsdale even when he was facing criminal charges as the above photo shows.

I wrote an article in March last year regarding Pell’s evidence at the Royal Commission which starts off:

“Cardinal George Pell, who was investigated in 2002 for sexually assaulting a 12 year-old-boy in 1961, gave evidence yesterday (24/3/14) at the Royal Commission into Institutional Responses to Child Sexual Abuse. It is a bit rich to call what came out of George’s mouth “evidence” given almost every second word would have to classified as perjury.” (Click her to read more)

Another article I wrote in September 2013 which has a lot of background information is titled “Tony Abbott and his friend Cardinal George Pell. Perceived bias for the Royal Commission into child sex abuse“ (Click here to read)

Is George Brandis a paedophile?

As we now know paedophilia goes to the highest levels of government in England so when members of parliament act as strange and in the circumstances that Brandis has I think it fair to ask the question about them.

One thing that is certain is that Brandis having lunch with Cardinal George Pell has given some credibility to a person who will go down in history as one of the biggest paedophile protectors the world has ever seen. And why Brandis has done that is something he needs to explain to the public.

Brandis is divorced with 2 children and his own sexuality is the subject of rumour or at least that is what the Sydney Morning Herald said in an article in 2013.

“Those who know him well insist occasional gossip about Brandis’s sexuality is baseless.” And “Don Markwell says he and Brandis have discussed sex only once in more than 40 years of friendship.” (Click here to read more)

I would like to know what those rumours are and whether or not a dodgy meeting with Pell is relevant.

The only rumour that I know of is that George Brandis is gay and was caught in bed with another man at university. If that is true who cares and he wouldn’t be the first gay person to get married and have children. But maybe the other rumours are a lot more than that.

Why George Brandis met with Cardinal Pell and why he tried to cover it up is unknown so all we can do is speculate to try to get to the truth and so we should as it is disgusting and needs to be exposed.

There will be suspicion about anyone who meets with George Pell. Even worse if they are the Federal Attorney-General

Everyone knows that the Catholic Church are protecting paedophiles on a huge scale. Now and in the past. I wouldn’t go anywhere near George Pell in a million years unless it was to try to expose his criminal conduct further.

George Brandis as put the credibility of the $500 million tax payer funded Royal Commission in jeopardy.

Tony Abbott and Brandis need to come clean now. The longer they wait the worse it will become. The above story is dynamite waiting to go off and it will sometime in the not too distant future I expect.

If this was a court case afoot the first question people would ask is: Has George Brandis and/or Tony Abbott interfered in the administration of justice. The Royal Commission isn’t a court case but it is the next best thing and people will be wondering for a long time if Brandis and/or Abbott have interfered with it. At least until they say what happened at the meeting with Brandis and Pell.