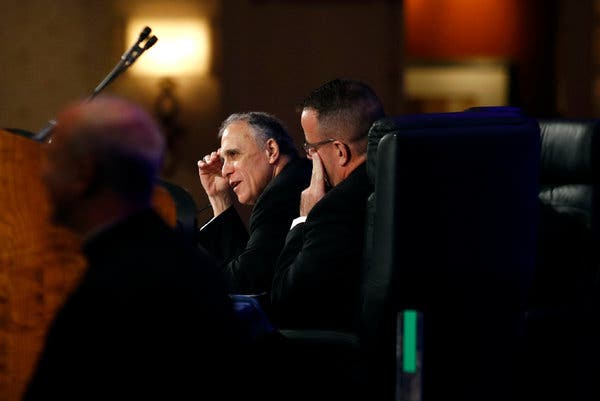 Dozens of local and federal law enforcement officers conducted a surprise search of the offices of the Roman Catholic Archdiocese of Galveston-Houston on Wednesday, looking for evidence in a clergy sexual abuse case that has ensnared the local archbishop, Cardinal Daniel N. DiNardo, who also serves as president of the United States Catholic bishops’ conference.

The raid in Houston is the latest sign of crisis in the church, with prosecutors growing more aggressive in their search for cover-ups of abuse, and the bishops — led by Cardinal DiNardo — hamstrung by the Vatican in their efforts to carry out reforms.

The church is under a barrage of investigations around the country. Attorneys general in at least a dozen states have opened inquiries, and the Justice Department has told bishops not to destroy any documents that could relate to sex abuse cases. Last month, the attorney general in Michigan executed search warrants on all seven Catholic dioceses in that state.

The scene outside the archdiocesan offices in Houston on Wednesday morning was extraordinary, with police cars lined up on the street and about 50 uniformed officers headed inside, some carrying boxes to hold evidence.

As the public face of the American bishops, Cardinal DiNardo has encouraged full cooperation with law enforcement, and his archdiocese struck the same tone as its offices were being searched. The archdiocese said in a statement on Wednesday that “the information being sought was already being compiled,” and that characterizing the search as an involuntary “raid” was unjustified.

But the assistant district attorney in charge of the investigation said that a search of the church offices was necessary because the Archdiocese of Galveston-Houston had turned over only a portion of the evidence.

“We anticipate there being a large volume of records,” said J. Tyler Dunman, an assistant district attorney and chief of the special crimes bureau for Montgomery County, who is in charge of the case. “What we’ve been provided is nowhere near what we expect to find.”

Investigators were searching primarily for records on the Rev. Manuel LaRosa-Lopez, who was arrested in September on four felony counts of indecency with a child. “But if we come across additional documents or evidence of criminal conduct,” said Mr. Dunman, investigators would gather those up, too.

A lawyer for Father LaRosa-Lopez, Wendell Odom, said last month that his client “denies any improper touching that would be considered a criminal act.” But he said that Father LaRosa-Lopez may have committed a “boundary violation,” and had apologized years ago to the young woman.

The priest was arrested after a second alleged victim — a man — came forward to the archdiocese and to police this year. Investigators are now working with four alleged victims of Father LaRosa-Lopez, and are communicating with others who may have been abused by him, Mr. Dunman said in a telephone interview.

Cardinal DiNardo has found himself on the defensive over his handling of Father LaRosa-Lopez, just as he has been frustrated in his campaign to reassure the public that the bishops are being transparent. Last month, the cardinal presided over a deflating national meeting in Baltimore at which the American bishops were prevented by the Vatican from voting on a package of policies intended to hold bishops accountable.

In an op-ed published in The Houston Chronicle on Monday, Cardinal DiNardo said that he had removed Father LaRosa-Lopez from ministry immediately after the second alleged victim came forward. He appeared to blame Child Protective Services for failing to act on the teenage girl’s report of abuse, saying that in the future the archdiocese would report abuse cases to both Child Protective Services and law enforcement. He did not explain why he had kept Father LaRosa-Lopez in ministry or named him vicar for Hispanics.

He wrote, “The vile and horrid acts of a small minority has shaped the perception of the media and many in the public about all priests — and now, our bishops. While this is understandable, it is regrettable and it is only through actions based on faith and just principles that this evil that afflicts the Church will be eradicated.”

The law enforcement officers who searched the archdiocesan offices on Wednesday were from the Texas Rangers, the Conroe Police Department, the Montgomery County district attorney’s office and other federal agencies, Mr. Dunman said, though he declined to specify which agencies. They combed through the building searching for documents, electronic communications and other evidence.

The Justice Department declined to comment, and it is unclear whether any of its agents were involved in the search of the archdiocese in Houston. The investigation of Father LaRosa-Lopez was underway before the Justice Department warned American bishops not to destroy their files.

Over more than 15 years, other bishops have had their offices searched when law enforcement suspected they were withholding records.

“Files can be in quite a few different places, and there are different sets of files,” said Terence McKiernan, president of BishopAccountability.org, a research and advocacy organization that documents the Catholic church’s abuse scandal.

Catholic dioceses keep personnel files as well as secret archives — confidential files that would contain any allegations of misconduct or details of treatment for problems such as addiction or pedophilia.

After Father LaRosa-Lopez was accused in 2001 of touching the teenager, he was sent to the Shalom Center, a treatment facility in Splendora, Tex. Law enforcement agents raided that center in September, as well as two parishes where Father LaRosa-Lopez had worked. He was released on bond in September, and is scheduled to appear in court in January.

We greatly appreciate your on-going generous financial and enthusiastic personal support for this site!